Barpeta is dotted with Satras and cultural institutions. Tourists from different places come to have a look at these Satras and feel the cultural vibe which spreads within. The different Satras like the Barpeta Satra, Patbaushi Satra, Ganakkuchi Satra, and Kanara Satra are famous places of tourism importance. Apart from that, one can also visit the famous industries of brass metal industry, ivory carving industry, and fire cracker industry to have a look at the skills of the artisans. There is also picturesque view of the river canals surrounding Barpeta which is worth watching. The Manas National Park is also a tourist destination situated at a distance of 44 kms away.

It is one of the famous tourist spot of Barpeta. Located on the banks of the Palangdi Bor at a distance of one and half kms from Barpeta Satra, this is the place where Mahapurush Shrimanta Sankardeva landed from his boat at Barpeta. He left his boat on the banks of the Palangdi Bor river and entered the forest for penance. He stayed here for six months and established a Namghar in the vicinity of the Chinpara Vithi. The Namghar is still existent in the place and large number of devotees come here every year.

This is a Shiva temple located at Dubi near Pathsala of Bajali sub-division.. This temple was founded in the ancient period. The Ahom king Shiva Singha made land grants about 760 puras recorded in copper plate inscription and donated an image of Goddess Durga here. They are located in the temple. According to legend, Queen Fuleshwari, was instrumental in bringing Devdasis from Upper Assam to perform dances for the amusement of the deities of the temple. The famous dance form ‘Devadasi Nritya’ is said to have originated in this temple.

Barpeta is the second largest town of the Barpeta district of Assam. It is also known as the ‘Land of Satras’ due to the numerous Satras dotting the region. These Satras were propagated by the great Assamese reformer Mahapurush Shrimanta Sankardeva and his followers. The tourist places of Barpeta largely comprises of these Satras and places of cultural significance.

Patbaushi Satra is an important Satra located around 2 kms north of the Barpeta town. It was from this Satra that Sankardeva promoted Vaishnava faith. Different art forms including the devotional songs, dances, theatre forms were also propagated by Sankardeva.

This Satra was built by Mahapurush Shrimanta Sankardeva who lived here for 18 long years. It is here, that he spread the literature, music, culture and art forms of Vaishnavism. It is in this Patbaushi Satra, he composed 240 Borgeets, Shastra (literature religious-cultural text) and Ankiya Nat (dramas). He also completed the ‘Kirtan Ghosa’ in this Satra.

The Satra presently preserves the writings and scripts of the great saint. The Satra is one of the major centers for religious and cultural entity. Every year many devotees and visitors form different places come to this Satra to have a glimpse of the culture, art forms and literature propagated by it. The State Government has taken steps for preservation of the teaching and treasures of Assamese heritage. It has planned to set up a Shrimanta Sankardeva Museum on the premises to preserve the artifacts, literature, cultural forms promoted by Mahapurush Shrimanta Sankardeva.

Apart from Srimanta Sankardeva, the Patbaushi Satra was also an abode of various other Vaishnava gurus like Sri Madhavdeva and Sri Damodardeva. The Damodar Deva Satra and a Math constructed by Ahom ruler Paramatta Singha lies in the premises of the Satra.

This Satra is located on the premises of Patbaushi Satra. It was founded by Damodardeva and got the royal patronage from the Ahom king Paramatta Singha. He constructed a Math near this Satra in memory of Shrimanta Sankardeva. Bhattadeve, who was the chief disciple of Damodardeva, wrote the Bhagawat scripture in prose from this Satra. The Satra has significant manuscripts including the ‘Katha-Bhagawat’, Guru-Lila, Dron-Parva of Mahabharata preserved in it. 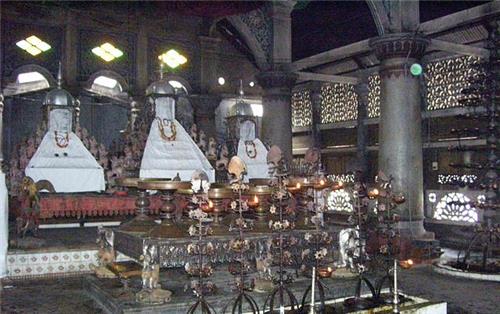 This Satra is located about 12 kms from Howly in Assam. It was founded by Sri Madhavdeva and is located in the radius of Barpeta Municipality in Barpeta town area. The land for this Satra was purchased by Shrimanta Sankardeva for 1 tola (about 10 grams) gold. Sankardeva nominated his close disciple Sri Madhavdeva as the Satradhikar here in order to spread the teachings and culture propagated by the saint. Madhavdeva went on to stay here for 18 long years (1550-1569). The Satra preserves a number of Sachipat puthis of Shrimanta Sankardeva and important manuscripts of Sri Ram Ata and Sri Ram Atoi. The Satra is a preservation centre for the valuable documents it holds.

This Satra is located at a distance of 8 kms Barpeta in Barpeta Jania Road. This Satra was established by Shrimanta Sankardeva’s disciple Sri Narayan Das Thakur Ata. He composed a large number of devotional songs in this Satra. 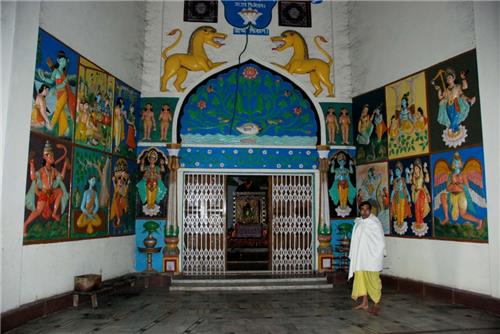 Sri Madhavdeva also composed the ‘Bhakti Ratnakar’ and ‘Namghosa’ in the original vithi of this Satra. The saint during his stay dug a well in this Satra which is preserved till today. The water of this well is considered holy. The Satra has three Guru Asanas placed in it in the name of Shrimanta Sankardeva, Sri Madhavdeva and Sri Badula Ata.

This Satra is located in heart of the Barpeta town of Assam. It was founded by Sri Madhavdeva around 500 years back. He lived here for 8 long years and wrote much literature here. Sri Madhavdeva, who was the closest disciple of Mahapurush Shrimanta Sankardeva, appointed Sri Mathura Das Burha Ata as the first Satradhikar before leaving the Satra to carry on other responsibilities. He then left to establish new Satras and promote the culture propagated by Shrimanta Sankardeva.

The Satra is an epitome of excellent architecture with a Kirtan Ghar having beautiful carvings of floral designs and sculptures on the wooden panel walls. The Kirtan Ghar is one of the biggest prayer halls among all the Satras of Assam till date. For holding the Naam Prasangas, two priests of the Satra sits behind the Asanas of Shrimanta Sankardeva, Sri Madhavdeva and Sri Badula Ata located here. It is considered as an epitome of mediaeval Assamese architecture and sculpture. The building is spread across over an area of 20 bighas within the Satra premises. 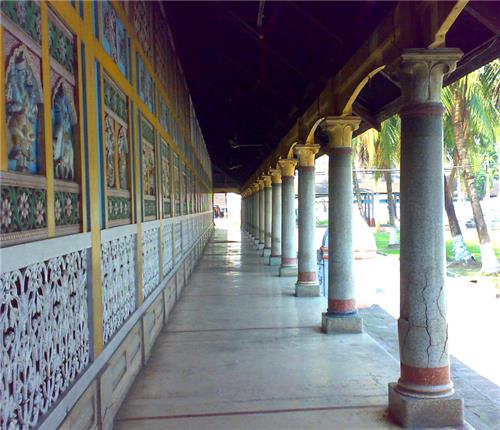 The Satra has many other buildings in addition to the Kirtan Ghar. The front gate of the Satra is called the ‘Batsora’. The Jagmohan Ghar is a place where all the devotees come and discuss their problems. The ‘Bhajghar’ contains a lamp which is burning on continuously for around 500 years now. It is also called the ‘Akhay Banti’. There are other buildings like a cultural school, Sri Mathura Das Burha Ata Library, Keli Kadam tree, study room, office, kitchen etc located within the premises.

The Barpeta Satra was the first Satra to administer a democratic system in an Assamese institution. Sri Mathura Das Burha Ata systemized the administration of the Satra and developed it into a socio-cultural institution epitome. Every year, many followers from the state throng the Satra to have an insight into the working, foundation and teachings of the Satra. The Barpeta Satra yearly celebrates Holi in great festivity. Doul festival is celebrated for four to five days at a stretch in the Satra. The Barpeta Satra is also called as Ditiya Vaikuntha Puri. Other festivals celebrated here include the Janmashtami.

This Satra is located about 2 kms east of Barpeta town. It was established by Sri Madhavdeva who lived here for a very short period. Baradi Satra is known as the Adi Satra of Sri Madhavdeva. This Satra became an important centre for learning. This Satra contributed a lot in Sanskrit literature teaching and spreading Sanskrit culture in the adjoining areas of the Satra. Holi is the main festival celebrated here. Devotees and tourists from all across the region come here annually during the Holi festival. 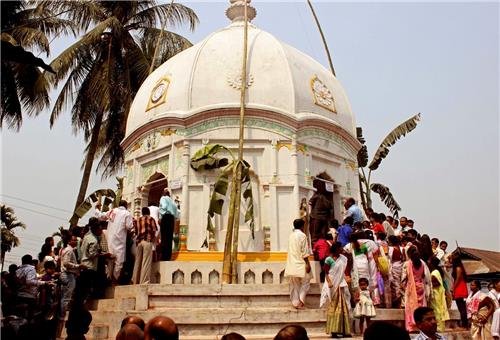 This Satra was established by Sri Narayan Das Thakur Ata. It is located around 16 kms from Barpeta town. It was originally damaged by natural calamities. Floods were a prime concern and problem for the inhabitants of this Satra. Due to this, the original inhabitants shifted to Gajia and Ganakkuchi in Barpeta.

There are forest department bungalows, cottages and lodges inside the park. Mathanguri is a beautiful spot. There are bungalows at the place. Tourists can contact the following for information regarding the park.

There are many fine hotels in Barpeta which provide excellent lodging facilities to the tourists. Some of them are Doli Hotel, Tripti Hotel, Chitralekha Hotel, Barpeta Tourist Lodge, Manas Guest House and Geetanjali Hotel among others.

Barpeta has a well connected rail and road route. However, to reach Barpeta by air, one has to use Gopinath Bordoloi Airport in Guwahati.

By Road:
Barpeta is well connected by road. It is connected to other places of the Northeast by NH 31. There are regular bus services which run from Guwahati to Barpeta.

By Rail:
The nearest railway station to Barpeta is the Barpeta road situated at the distance of 21 kms.

By Air:
The nearest airport is the Gopinath Bordoloi Airport in Guwahati.