Barpeta or the ‘Land of the Satras’ as it is popularly known is the second largest town of the Barpeta district of Assam. Barpeta has a number of Satras dotting the region which were propagated by the great Assamese reformer Mahapurush Shrimanta Sankardeva and his followers. Barpeta town is bound by canals and two tributaries of the Brahmaputra namely Saolkhowa and Mora Nodi which run through the town. It is bordered equally by hills of Bhutan and plains of Kamrup and Nalbari district respectively.

According to the 2001 census, Barpeta had a population of 41,175. The average literacy rate stands at 80% and the population percentage of males to females is 50% to 50%. The main religions prevalent are Hindus, Muslims and Christians. The people of Barpeta speak a typical language style known as ‘Barpetia’ language. This style is popular all over Assam.

Barpeta district is an administrative district of Assam with its headquarters located in Barpeta town. The Barpeta district has two sub division and six revenue circles and developmental blocks. 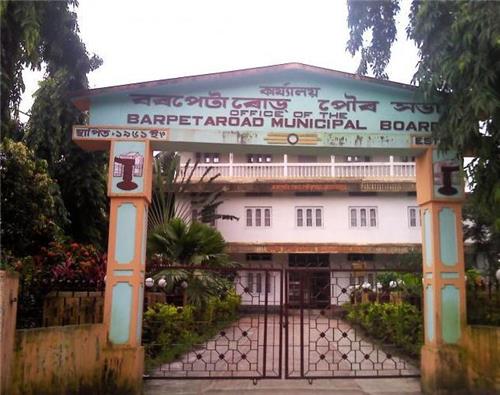 The District Rural Development Agency in Barpeta implements infrastructure and policies for the development of the rural sectors of the district in their social and economic fields. Under the effectiveness of various programmes implemented by the development authorities, the agency works to bring them into effect and develop the rural areas under the district. 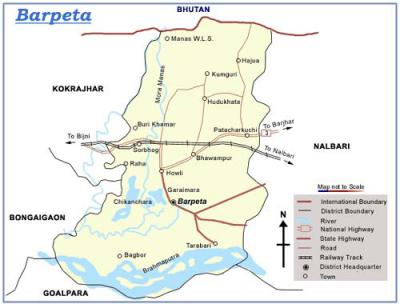 Barpeta found its origin predominantly due to its religious places and Satras built by Mahapurush Shrimanta Sankardeva and his disciples who came to Barpeta from Upper Assam to preach Vaishnav culture. Over time, Barpeta witnessed the rule of different kingdoms which played an important part in its historical development. It was during Koch King Naranarayan’s rule that Mahapurush Shrimanta Sankardeva built Satras to spread his cultural teachings. But the Koch King regime soon ended with the invasion by the Mughals. The Mughals systematized the revenue process dividing and assigning tasks to the different sections of people. During the Mughal rule, land grants in form of copper plate inscriptions were provided for building of more Satras over the region.

After a span of years, the Maans from Myanmar invaded Barpeta and destructed everything that came their way. This made the British intervene to restore peace and order in the region. In 1841, Barpeta became a civil sub division and land revenue rates were increased as a policy of exploitation by the British. This led to peasant unrest and they revolted against the British rule. However, after Independence, Barpeta again developed and civil peace and order showed rays of arrival in the region.

Manas River is a trans-boundary river originating in Bhutan and flows through Bhutan and India. The river is named after the serpent God Manasa in Hindu mythology. It flows through southern Bhutan, enters in into India through Assam and finally merging into the Brahmaputra in Jogighopa. 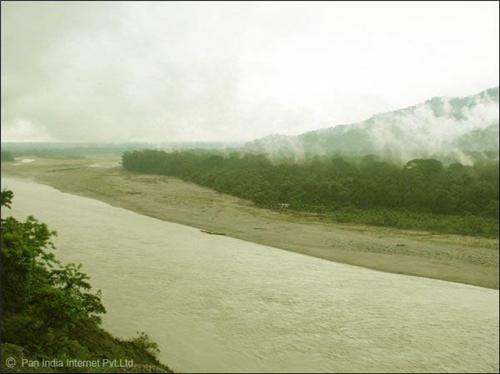 Facts about the Manas River:

The Manas river system is formed with a number of tributaries forming out from northern Bhutan, Arunachal Pradesh in India and southern Himalayas. The upper flow area of the river is steep hill bound and the lower end flow is wider as the river banks widen up in Assam. The middle and the lower end of the river flows through thickly forested areas.

The main stem of the river is Manas or Gongri River which originates in the west Kameng district of Arunachal Pradesh. This flows in a south westerly direction and enters Bhutan near Tashigang. Here it is joined by Kulong Chu which originates in the northern Himalayan snow ranges of Bhutan.  The Kulong Chu is joined by other sub tributary rivers namely the Tongsa Chu and Bumthang River.

Another tributary which joins the Manas in southern Bhutan is the Lhobrak or Kuri Chhu. It is the central tributary which rises in the north in the Great Himalayas. At this junction, the river bed level is 121 meters. After flowing in a south western direction in Bhutan, the river enters Assam through the Goalpara district. Here the river meanders for about 75 kms and eventually merges into the mighty Brahmaputra at Jogighopa.

Another tributary of Manas, the Ai River which originates in Bhutan flows in the south western region of Bhutan and enters the Goalpara district of Assam and joins the Manas which eventually fall into the Brahmaputra. The river valleys of the Manas varies from small meadows located in thick deciduous forests in the upper regions and wide sandy stretches with trees in the lower reaches of the river.

Barpeta is not much economically developed. The main income source is agriculture. Apart from that, the people are engaged in handicrafts and ivory carving which are popular all over Assam. The fire cracker industry and the Brass metal industry at Sarthebari are other two popular industries located in Barpeta which engage a number of people. Holi (Fagua) is the main festival held here in Barpeta.

The cultural heritage of Barpeta is dominated by the Assamese preaching of Mahapurush Shrimanta Sankardeva. The Satras and cultural art forms like the different ‘Geet’ forms, dances, theatre and drama are what encompass the culture of Barpeta.

With time Barpeta shone on the cultural map of India through the remarkable work of the great reformer and cultural exponent Mahapurush Shrimanta Sankardeva. He preached religious and cultural values through the Satras or institutions he built. This was followed by Madhabdeva, Haridev, Damodardev and other followers who carried on the teaching and legacy of Shrimanta Sankardeva by building more Satras. Though initially these institutions preached Vaishnav culture, but with time they transformed to open universities providing humanitarian values and all culture teachings. They also provided subjects like music, dance and other vocational aspects which will not only help people to lead a good life through the values but will also engage him economically. Some of the Satras are Patbaushi Satra, Barpeta Satra, Ganakkuchi Satra, Barada Satra, Jania Satra, Saundariya Satra and Satra Kanara among others. 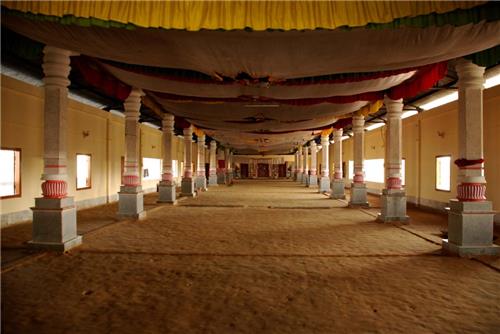 Barpeta is divided into 22 Hattis which are run by families of the Gurus administered by the Satra administration. These Satras and institutions attract people from every nook and corner of Assam to look into the heritage and historical significance of them. Some of the popular Satras are Barpeta Satra, Patbaushi Satra, Sunpura Satra, Kanara Satra etc.

Established by Shrmanta Shankardeva, this Satra was the start from wherein he started to spread the faith and work culture of the Satras. As many as 18 borgeets were written by him in this Satra itself. He spent 18 years of his life in the Patbaushi Satra. It is located around 2 kms. away from Barpeta town.

Founded by Madhab Deva, the Ganakkuchi Satra is the place through  which he preached the teachings of the Guru. In order to establish the Satra, the land was purchased by Shrimanta Shankardeva himself and then nominated Madhab Deva as the satradhikar to preach the teachings. He went on to stay in this satra for 18 long years.

Shri Narayan Das Thakur, another disciple of Shrimanta Shankardeva established the Jania Satra. Located 8 kms. away from the main town, he composed a lot of songs here in this place.

Another satra established by Madhab Deva himself, the Baradi Satra is considered as the ‘Adi Satra’ of Madhab Deva who stayed here for a very short period of time. Located around 2 kms. away from Barpeta town, Holi is a festival played with great merriment here.

Located 16 kms. away from Barpeta town, the Satra Kanara was established by Sri Sri Narayan Das Thakur Ata. However, unfortunately natural calamities had a destructive effect on this satra and so the original inhabitants then shifted to Gajia and Ganakkuchi in Barpeta

This is the only learning centre for Muslim community. Barpeta District head Markaz, Howly is one of the leading Markazs of Barpeta. There are different branches of the Howly head Markaz as the Barpeta Town Markaz Mosque, Mandia Zame Mosque, Bhella Zame Mosque etc.

There are different cultural art forms in Barpeta which are both ethnic and non ethnic. Some of them are:

Borgeet:
These are the devotional songs composed by Mahapurush Shrimanta Sankardeva.

Ankiya Geet:
These are composed by Sankardeva for Ankiya-nats or plays. They are sung on occasions like Doul, festivals and anniversaries.

Holi Geet:
These are chorus songs which are sung during Doul festivals. They originated in Barpeta Satra.

Loka Geet:
Kamrupi Loka Geet is a famous folk music forms in Assam. These songs express thoughts and emotions of the people and are prevalent since a very long time. These songs are also related to various day to day activities like marriage, fishing, lullaby, child’s play, different forms of Bihu, etc.

Polly Geet:
These songs originated in Bengal and are a combination of East Bengal folk songs and Assamese Loka Geet. This is different from Goalporia Loka Geet and is sung mostly by East Bengal rooted MIA community based people.


Art and Craft in Barpeta

The people of Barpeta are engaged in making decorative handicrafts like furniture, gift items etc. with cane and bamboo. The local people and rural artisans earn a fairly good livelihood through this handicraft.

Bell and Brass Metal Industry
The Bell and Brass Metal industry at Sarthebari is popular over the world for its brass and bell metal works. Utensils used in occasions in the Assamese household, traditional items like the Xorai, Bota etc. are all prepared by this industry. 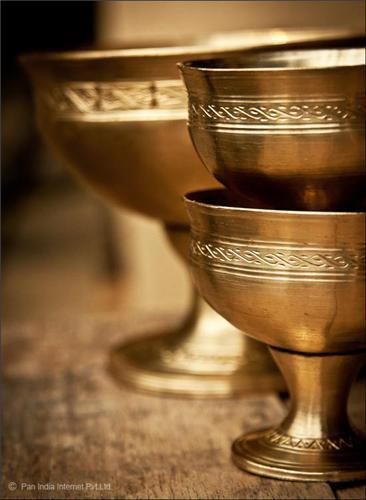 Pottery:
The Hira community is engaged in the pottery profession.

Mask and Paintings:
There are masks which are prepared with materials like terracotta, metal, bamboo and are used in ‘Bhaonas’. Paintings done by skillful artisans can also be seen in the Satras.

Jewelry:
Barpeta is famous for the traditional Assamese jewelry used mostly by the female community. 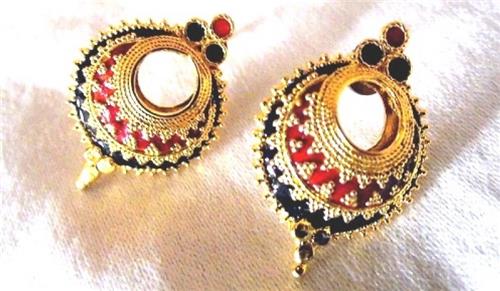 Wooden Craft:
The Satras also have wooden artifacts made by the skilful artisans, the Guru Asana (pedestal of the Guru) and the animals and birds of mythology are carved out and designed by the artisans.

Ivory Carvings:
Toys, Images of Gods and Goddesses, Comb, etc are made by the artisans of Barpeta in the famous ivory carving industry. This ivory carving skills and making materials is prevalent from the times of Mahapurush Shrimanta Sankardeva.

The term entertainment includes aspects like cinema, theater, sports, games, dance and music among others. Barpeta town is located in lower Assam and has well developed commercial establishments spread across the town. There are cinema halls, shopping avenues and hotels in and around Barpeta. The town of Barpeta has all the entertainment facilities by which one can relax and have fun.

Cinema:
Cinema is an important source of fun and entertainment for people. It is a way of unwinding and relaxing after a day of tiresome work. Some of the cinema halls located in Barpeta are Indrapuri Cinema Hall and Dilip Cinema Hall.

Jatra Gaan:
This is an ancient form of drama and theatre performed in remote areas of the East Bengal MIA community people. 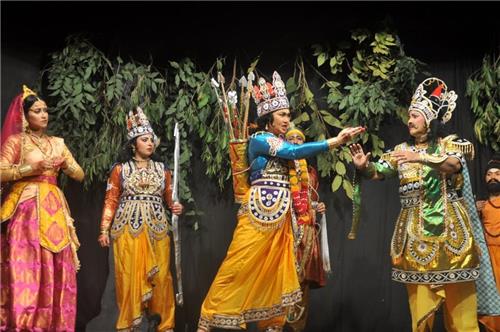 Theater:
Theater is another important source of entertainment of Assamese people since earlier times. People often watch theaters and Bhaonas or plays enacted by artists. The rural people still find theater the most important source of entertainment. Famous theater groups better known as Bhramyaman theaters like Aabahan and Kohinoor enact plays across the state of Assam.

‘Bhaona’ or mythological plays are popular even today among the people. This play form was propagated by Sankardeva and is characterized by people wearing colorful dresses and make up enacting different characters from the mythological stories. Apart from that, there were modern dance forms which resulted in formation of theatre groups like the Nataraj, Abahan, and Aradhana from Pathshala to spread across the Assam region. These theatres became popular with people looking forward to it every year even now.